I would encourage those interested in the debate on fixed-odds wagering on horse racing read the Blood-Horse coverage on testimony given by Patrick Cummings of the Thoroughbred Idea Foundation to the Kentucky General Assembly’s Interim Joint Committee of Licensing & Occupations on Wednesday, October 2nd, and a piece by Dean Towers which appeared in the Thoroughbred Daily News on Tuesday evening. Both gentlemen make thoughtful cases for fixed-odds wagering on horse racing in the United States, and cite examples (Mr. Towers in his article, and Mr. Cummings in his testimony however not featured in the article) how fixed-odds and pari-mutuel co-existence has been minimally-disruptive to the business model in Australia.

Prize money has increased in Australia since the introduction of off-track Corporate Bookmakers in Australia in 2004. Furthermore, wagering with bookmakers, i.e. fixed-odds wagers, account for over forty percent of total handle on Australian racing.

You can see its progression here – 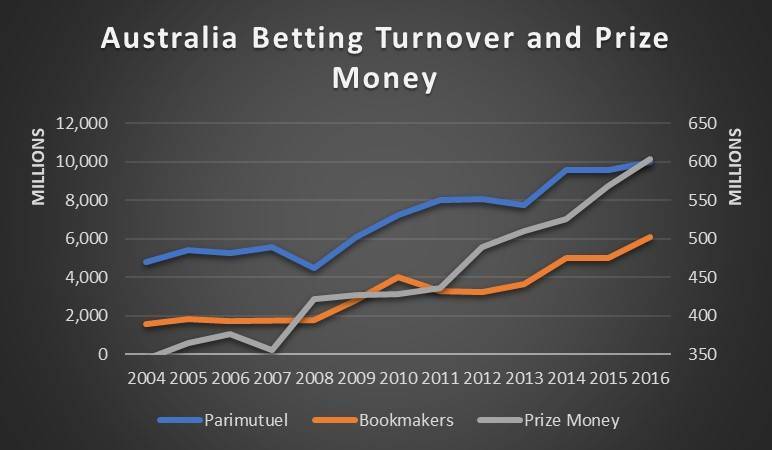 **Figures are from the IFHA Facts and Figures

The key to both preserving and growing their purse structure from off-track bookmaking is commonly referred to as the “Race Fields Legislation,” a series of amendments introduced in the New South Wales State Parliament in 2006 to the Racing Administration Act 1998. Unlike the United States with its Interstate Horseracing Act, each state and territory in Australia have a racing act which enables legal wagering, taxation and regulation of Thoroughbred, Standardbred and Greyhound racing. Australia, like Great Britain, had a long tradition of on-track bookmakers, however by 2004 off-track corporate bookmakers had set up shop in Australia, and were taking bets interstate without paying taxes interstate. These same firms had operated off-shore and in a legal grey area. Race Fields was a collective product of the board of directors of Racing NSW, the Principal Racing Authority (PRA) composed of both industry and independent directors, and the legislature, which prohibited licensed wagering operators from publishing and using race fields information, i.e. the form, odds, entries and results, without approval from the PRA and tacit agreement to its fee structure. By 2008, Racing NSW applied a minimum 1.5% tax rate on all turnover or handle of operators handling greater than $5 million in wagers. Racing NSW took the position that race fields were racing’s intellectual property, and as such, were entitled to price their product accordingly.

Two operators, Sportsbet and Betfair, challenged the new law in Federal Court in late 2008. Sportsbet took the position they did not have to pay to take bets on information in the public domain, and Betfair claimed the 1.5% was higher than their business plan would allow. While the court case advanced, there were bitter disputes within the industry, larger media, and calls for termination of the Racing NSW chief executive Peter V’Landys and its corporate governance. In March 2012, the High Court of Australia ruled in favor of Racing NSW, a decision which figured highly on the intellectual property argument in the Full Federal Court. Racing NSW was able to collect the 1.5% tax revenue in those four years, which it held in escrow, and accrued to over $150 million. Other states changed their laws accordingly, and state governments coalesced support around the racing industry when wagering on professional sports were subsequently permitted, making sure the PRA’s in New South Wales, Victoria, and Queensland acted as the licensor for professional sports, received licensing fees from Sports Leagues for racing infrastructure, and a cut of either net wagering revenue or profits from professional sports to racing. There was consolidation within the corporate bookmakers’ ranks, since there is great risk to each operator in a bookmaking system, however as you can see their market share, and conversely profitability has grown.

The alternative to fair taxation is Great Britain, where the birthplace of Thoroughbred racing has fixed-odd operators responsible for the lion’s share of their handle however have been historically unwilling to contribute towards their purses. Below is a sample of their handle and purses.

**Figures are from IFHA Facts and Figures

American Thoroughbred racing, like Japan, Hong Kong and France, has long depended on the pari-mutuel product for some of the best purses in the world.

**Figures are from The Jockey Club – Handle and Prize Money

In the midst of national contraction and volatility, the Historical Racing product in Kentucky has provided real strength to our purse program via growth in both the Kentucky Thoroughbred Development Fund and association purses, which has also boosted handle and fields in our live handle.

As Mr. Angst’s Blood-Horse article demonstrates, the Licensing & Occupations committee members seemed both interested in the concept as it relates to capturing revenue and mindful of protecting our industry. Racing stakeholders including regulator, racing associations and Horsemen must demonstrate the business cost involved in ensuring quality racing, infrastructure and technology investment and maintenance, integrity, safety and welfare of all horses and licensed participants while working in concert with elected officials to protect the business model in Kentucky and everywhere KY-bred horses race in the United States. We shall keep you informed of further developments.