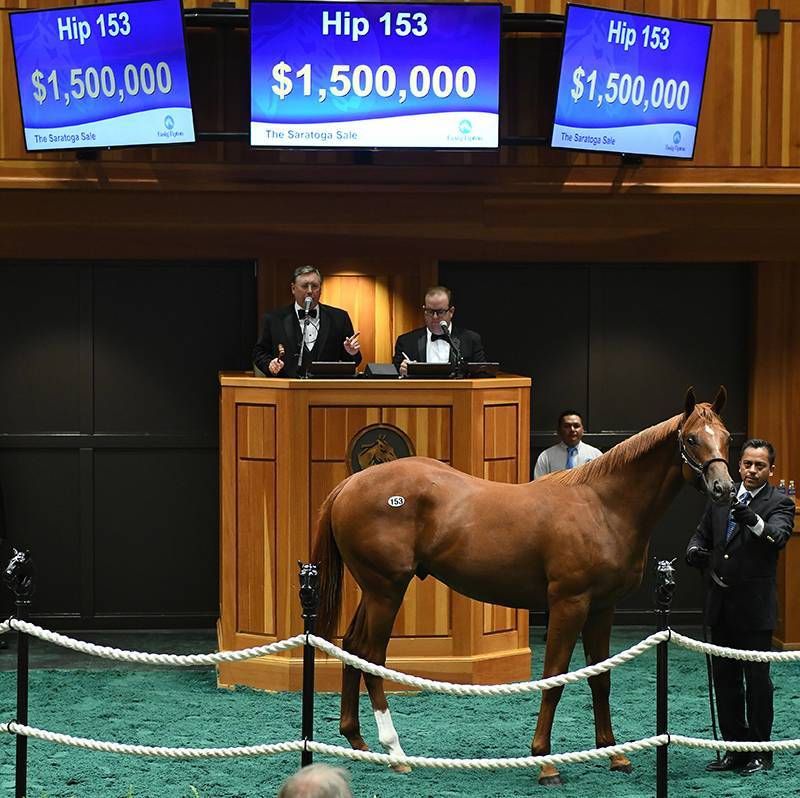 The Aug. 5-6 Fasig-Tipton Saratoga Yearling Sale concluded Tuesday evening with smashing results, topped by three juveniles by Curlin who all brought seven figures, including a pair of colts that sold for $1.5 million each.

The sale was a banner one for juveniles from the Bluegrass State, with all top 10 lots hailing from Kentucky. There were a total of four million-dollar sellers, all colts, rounded out by a son of champion sire Tapit that sold on Monday evening.

Tuesday belonged to Curlin though. Hip No. 153, a chestnut colt consigned by Denali Stud and purchased by Aquis Farm AUS/Let’s Go Stable was the first to reach the highwater mark. The colt is the first foal out of Chilean champion Wapi, a daughter of Scat Daddy whose dam We Can Leave was also a Grade 1 performer.

A short time later, Hip No. 174, consigned by Stone Farm and bought by a partnership headed by West Point Thoroughbreds, would be the sale’s co-topper. The chestnut is the first foal out of the Grade 3-winning A. P. Indy mare America and his fourth dam is the blue-hen mare Blush With Pride.

The third Curlin to reach $1 million was also consigned by Denali. Hip No. 159 went to Whitehorse and Bridlewood Farm. The colt’s dam was stakes-placed at 2 and is from the family of top sprinter Chimes Band.

Rounding out the seven-figure juveniles was hip No. 80, the Tapit colt consigned by Lane’s End, agent and sold to West Point Thoroughbreds. The colt is out of the top-class mare Feathered, winner of the Edgewood S. (G3) and runner-up in the American Oaks (G1). His third and fourth dams, Finder’s Fee and Fantastic Find, were both Grade 1 winners.

Other Kentucky-based stallions rounding out the top 10 lots included freshman sire American Pharoah, with a $950,000 colt purchased by M V Magnier, another each by Curlin and Tapit that brought the same price, and a trio of juveniles by Medaglia d’Oro.